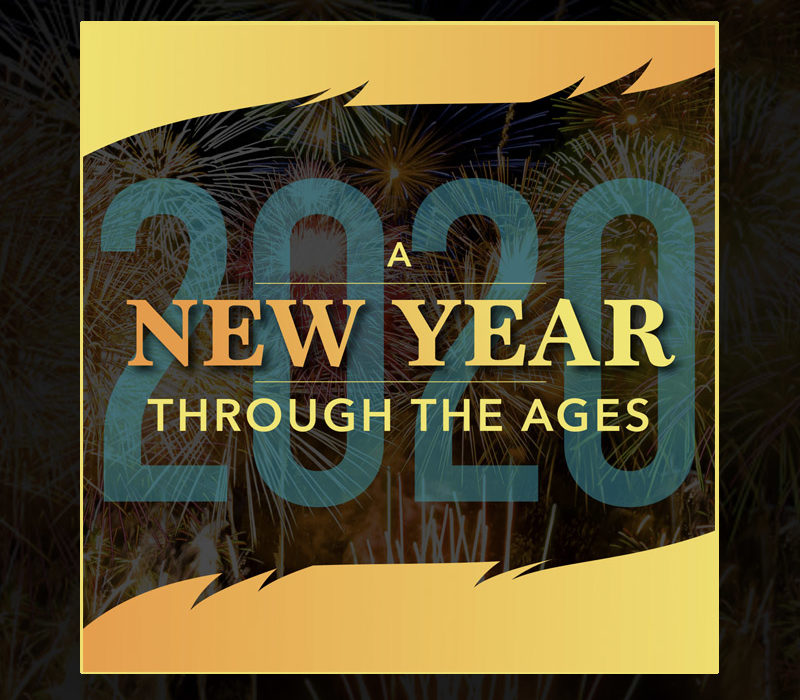 A New Year Through the Ages

You did it! You made it through another year. Another year of school/work/parenting/just being a person. You had some shining moments and, maybe one or two that you would rather forget. Whether your 2019 was full of successes or hardships the New Year offers the opportunity to reflect on past mistakes, to give thanks for loved ones, and to ultimately envision the year ahead. In popular American culture the dawn of a New Year is often accompanied with resolution. The decision to do, or not do something for a year in the name of self-improvement is an admirable goal. However, keeping that resolution is often easier said than done. Studies show that most people who participate in this tradition quit within the first few months. So why is it that every year people across the country make personal commitments to eat more vegetables, only to find themselves elbow deep in a tub of cheese puffs the following week? How did this tradition even come to be? To find the answers you have to do a little digging.

The Babylonians are believed to be the first civilization to hold New Year celebrations some 4,000 years ago. This New Year was celebrated during the Spring Equinox which marked the planting of a new crop. To ensure the success of that crop they made promises to their gods, that all debts would be payed, and anything borrowed would be returned. The Romans would eventually tweak the calendar to place the New Year on January 1 to honor the deity Janus, the god of change and new beginnings. As a gesture of good faith, the romans would exchange gifts with neighbors and provide tribute to the deity to ring in the New Year. These traditions of self reflection and well wishes are observed in cultures around the world and serve as the precursors to the New Year celebrations recognized in popular culture today.

New Year celebrations as we know them now are based on the Gregorian calendar but for many Native peoples across America, January, 1 occurs several weeks into their observed calendar. Traditionally the calendar would have mimicked the cycles of nature, placing the New Year either at the beginning or end of the winter solstice. For the Hopi and Zuni pueblos the New Year occurs in the third week of December with a ceremony held to welcome back the sun from a long winter. For the Umatilla Tribes of Oregon the celebration was dedicated to the return of sacred foods like the salmon. While traditional practices and ceremonies differ greatly amongst native peoples, similar themes can be found. Many celebrations revolve around nature, the sun, or crops needed to survive, others celebrate ancestors and loved ones.

Regardless of how you celebrate the New Year, or what day your year begins on, the same themes are ever present. The ringing in of a New Year should be a time of evaluation, a deep look into our place and purpose in the world. It should be a time for planning, and goals, and the development of lifelong healthy habits. But it shouldn’t be the only time of the year dedicated to self improvement, or celebrating the things and people we care about. Maybe a year for you is your birthday, or an anniversary. Maybe its marked by the passing of a loved one or the birth of a child. No matter how we measure the year we should celebrate these milestones however big, or small they may be.